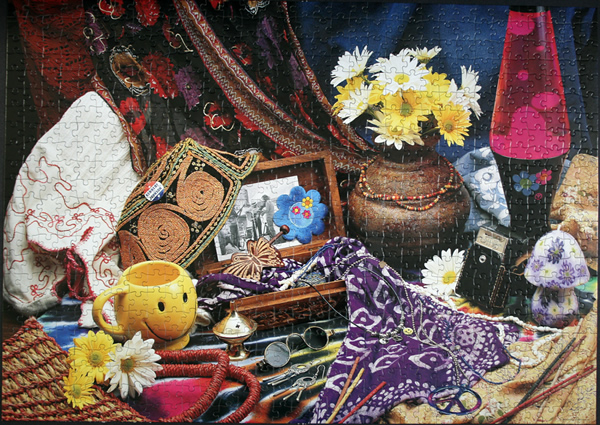 Size: 750 pieces
Dimensions: 48.1cm x 68cm
Producer: Kodak, RoseArt, Decades series, No.21020
Puzzle: Enough different colours and textures to make the completion of this puzzle a breeze. Yellow cup and flowers, purple and white fabric, lava lamp, white fabric with red embroidery, the photograph, the straw hat are all sufficiently different to be easily assembled first, guiding the rest of the puzzle to completion.

The 60’s: The counterculture movement dominated the second half of the 1960s, its most famous moments being the Summer of Love in San Francisco in 1967, and the Woodstock Festival in upstate New York in 1969. Psychedelic drugs, especially LSD, were widely used medicinally, spiritually and recreationally throughout the late 1960s, and were popularized by Timothy Leary with his slogan “Turn on, tune in, drop out”. There was a growing interest in Eastern religions and philosophy, and many attempts were made to found communes, which varied from supporting free love to religious puritanism. [Wiki]