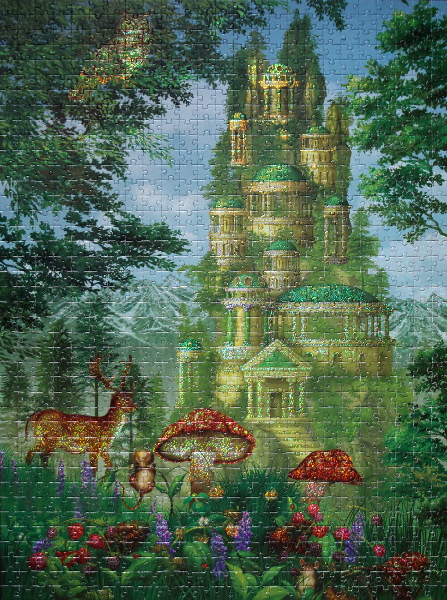 Size: 1000 pieces
Dimensions: 51cm x 68cm
Producer:  LPF Ltd., Holographic puzzle, #3921
Artist: Ciro Marchetti has had a successful graphic design career that has spanned working in Europe, South America and the US. He is a five-time recipient of the distinguished Photoshop GURU award, and three time winner of the Worldwide Photoshop Competition presented by the National Association of Photoshop Professionals. The current content and style of recent illustrations directly reflect his sources of interest and inspiration, allowing him to create richly detailed images that conjure up retro- tech worlds of fantasy and imagination. [Puzzle box]

Puzzle: After looking everywhere for over 2 years, I have finally located this beautiful puzzle on the Bits and Pieces site. It is by Ciro Marchetti, from the same series as City of Wands, Above the Clouds, and Shangri-La Winter.

Reminiscent of Elvish tree-cities, this puzzle is stunning. Not trivial to put together due to the shimmering pieces, large tree foliage area, and similarity of the city pillars, but its assembly makes for a serene experience, resulting in a beautiful picture. It is now decorating the wall in my studio.

For an assembly order, I would suggest the red mushroom caps and the deer, followed by the owl and the purple and red flowers and berries at the bottom. The green roofs of the city can come next, followed by the mountain border with the sky. From here, it takes a while to assemble the city buildings, followed by the trees, and sky. I just put on a good audiobook and lost myself in pattern matching for a while. I absolutely love Ciro Marchetti’s city concepts.