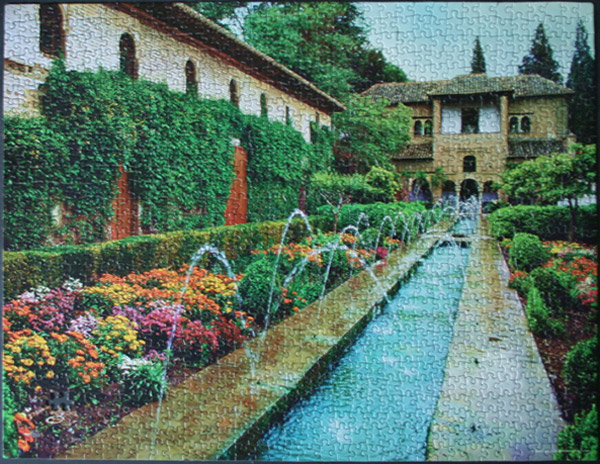 Size: 1000 pieces, 1 missing
Dimensions: 51.12cm x 66.52cm
Producer: Big Ben
Location: The Palacio de Generalife (Arabic: Jannat al-‘Arif’ – Architect’s Garden) was the summer palace and country estate of the Nasrid Emirs of the Emirate of Granada, now beside the city of Granada in the autonomous community of Andalusia, Spain.

The complex consists of the Patio de la Acequia (Court of the Water Channel or Water-Garden Courtyard), which has a long pool framed by flowerbeds, fountains, colonnades and pavilions, and the Jardín de la Sultana (Sultana’s Garden or Courtyard of the Cypress). The former is thought to best preserve the style of the medieval garden in Al-Andalus. [Wiki]