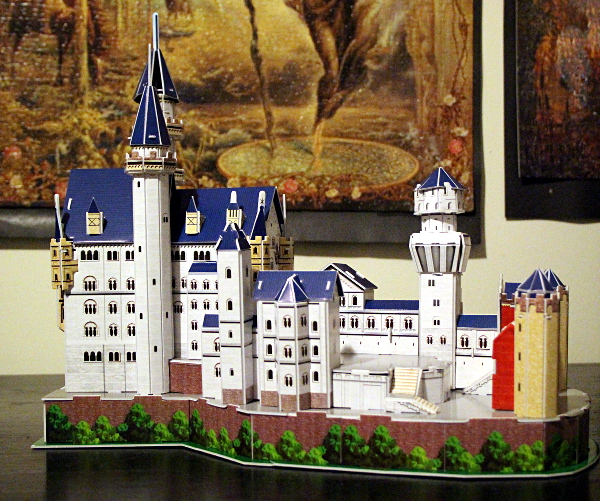 Puzzle: Following the St. Basil’s Cathedral, the Taj Mahal, and the Parliament Buildings of Canada 3D puzzles, I am now perpetually on the lookout for other higher-complexity puzzles made by CubicFun, and my partner found one in a nearby toy store (Mrs. Tiggy Winkles), getting it for me as a surprise the weekend when I was sick. 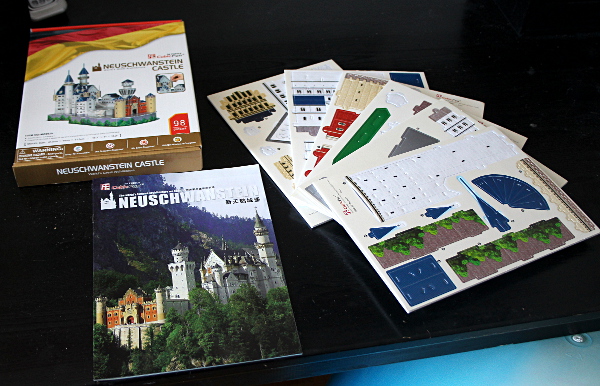 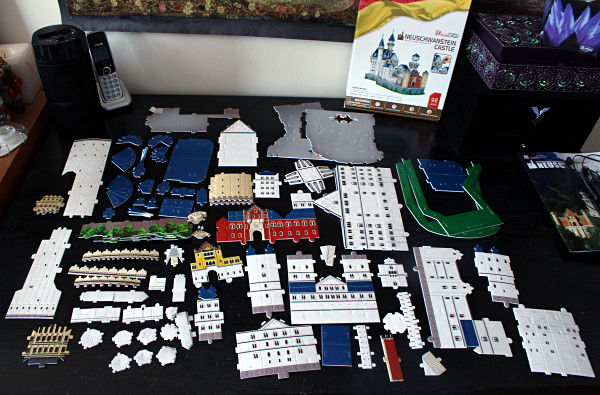 3. And putting together the puzzle itself. Below are the progress photos: 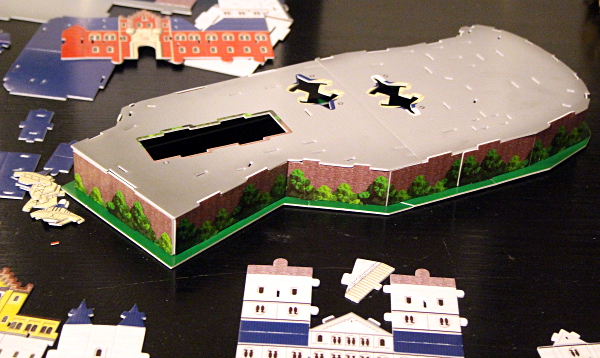 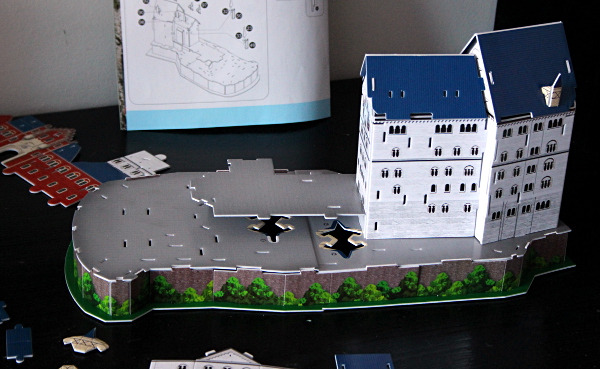 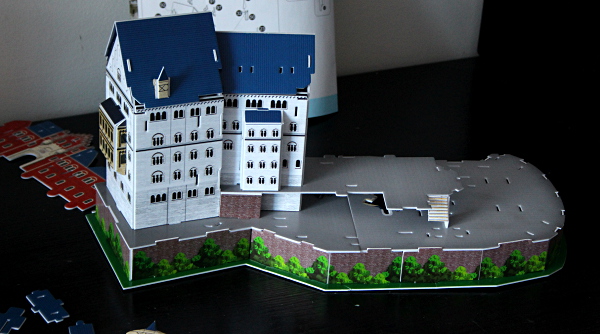 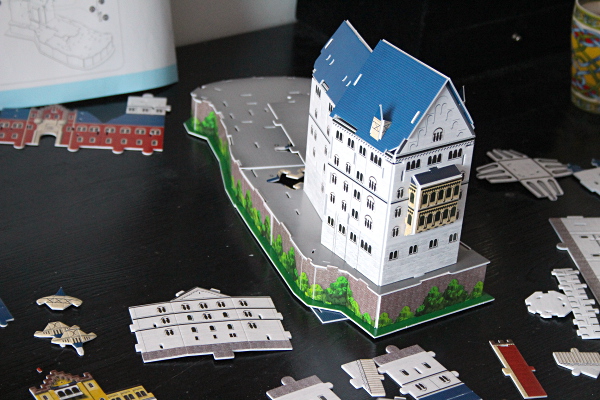 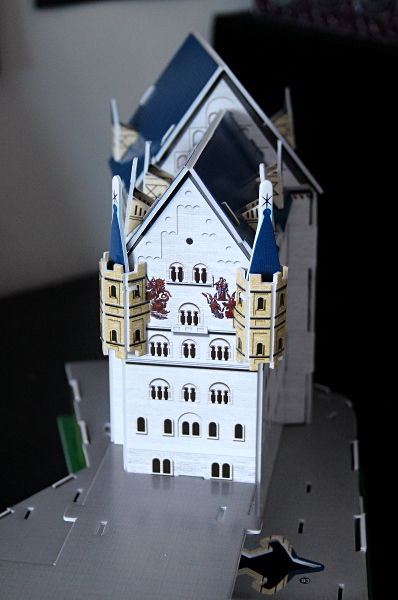 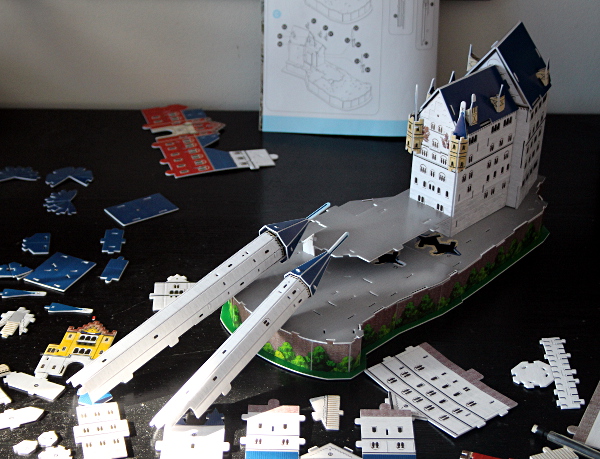 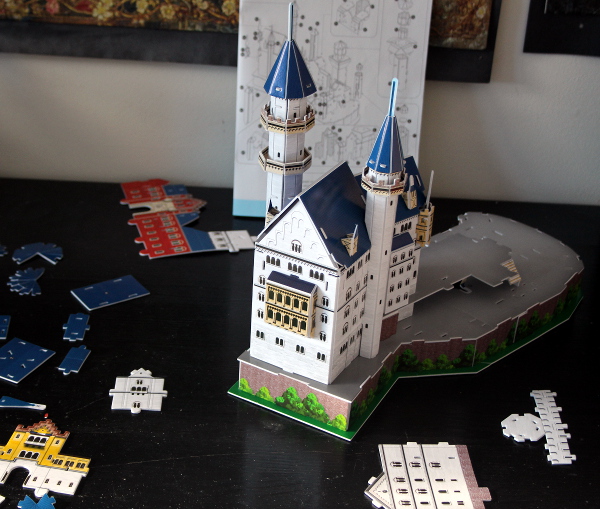 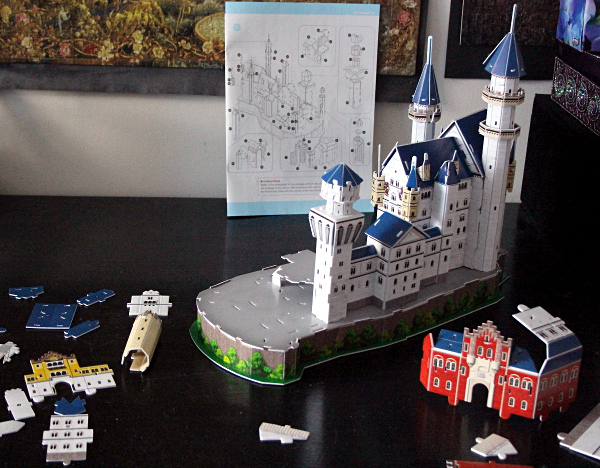 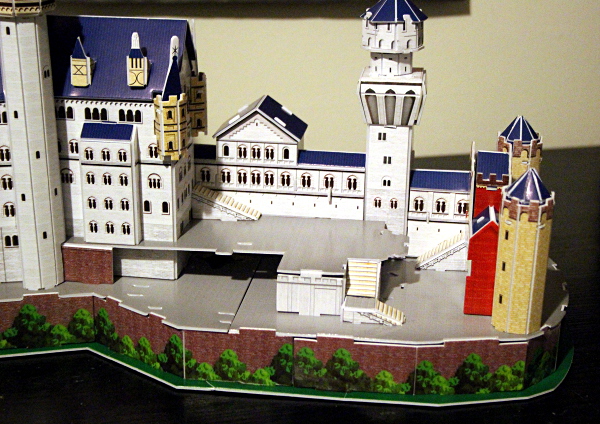 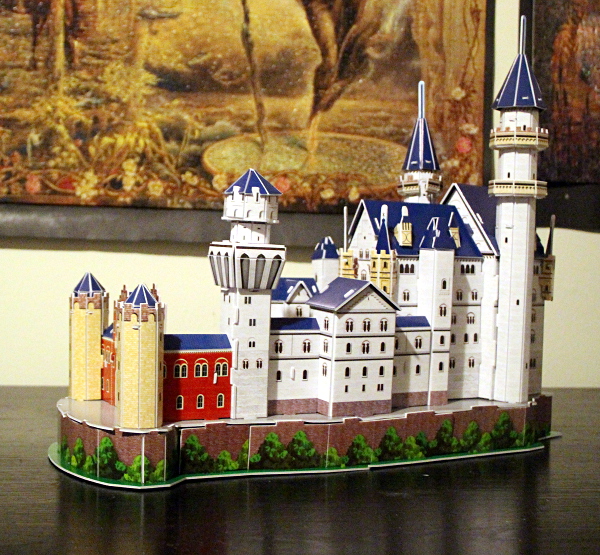 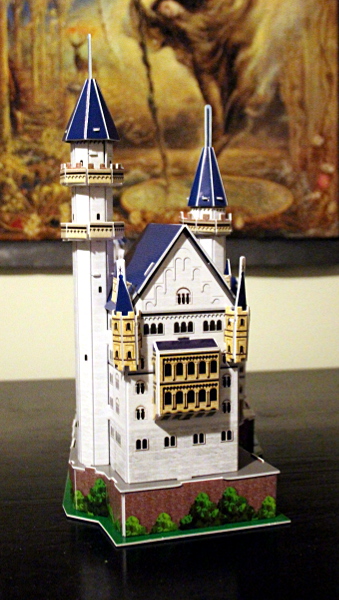 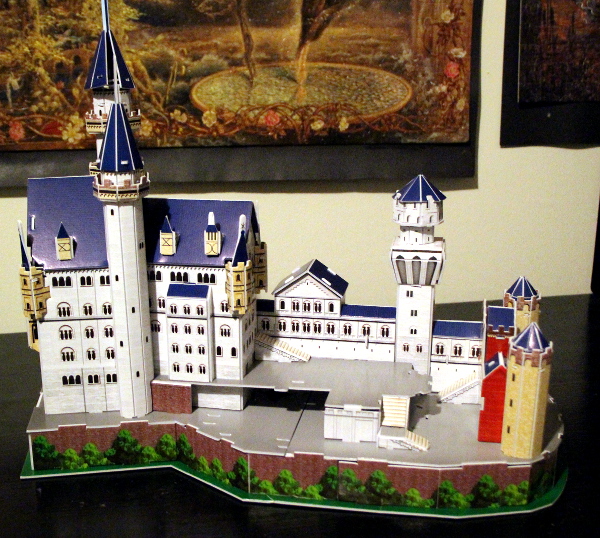 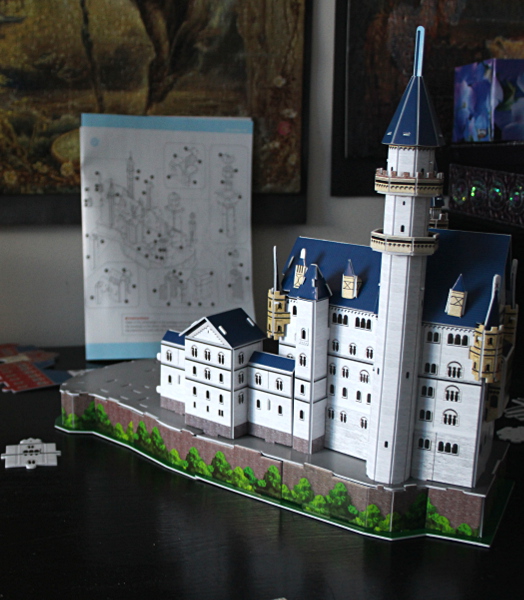 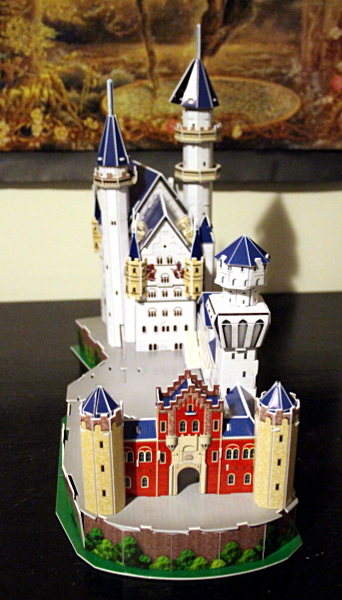 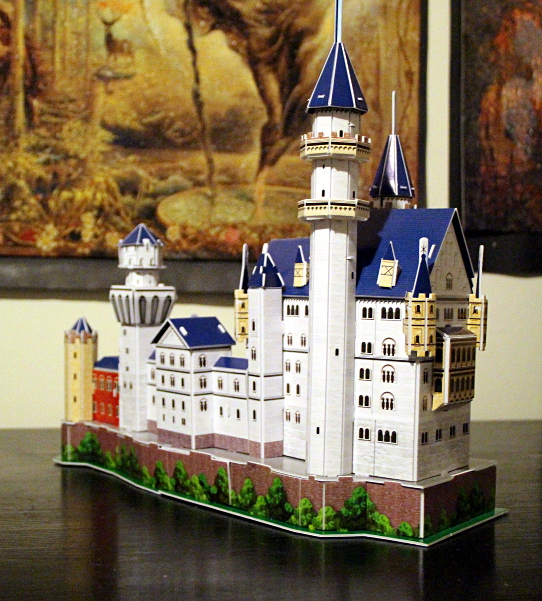 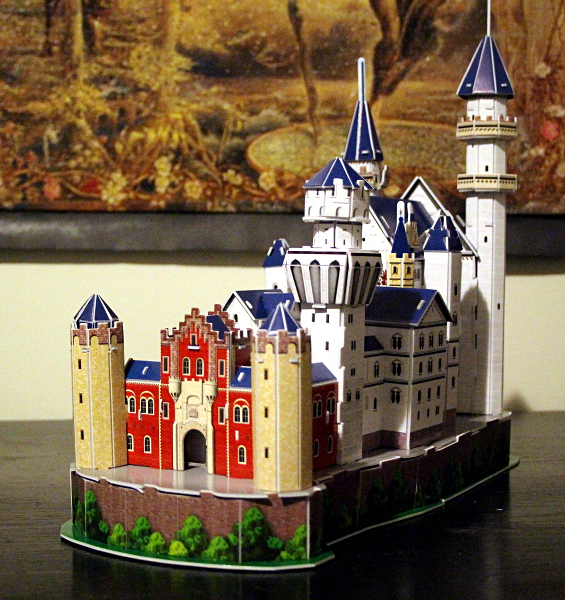 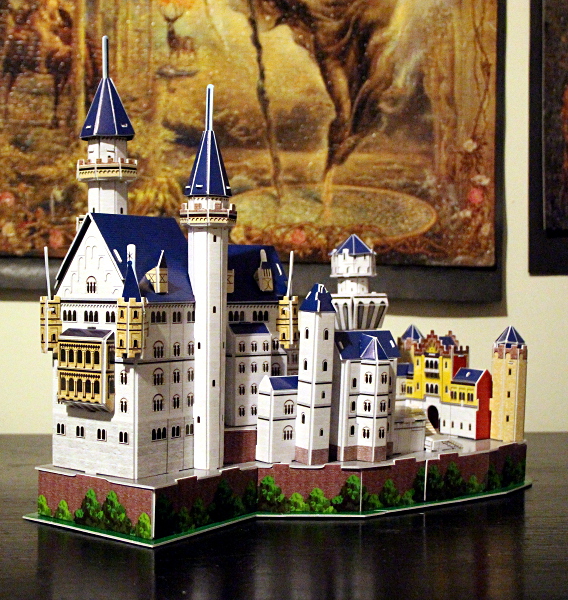 I have quite enjoyed this puzzle. It is well-made and the castle looks beautiful when assembled.

Please note that I have not changed any spelling or grammar.

“The world’s famous architecture we build it. Neuschwanstein.

Neuschwanstein is a 19th-century Bavarian palace on a rugged hill near Hohenschwangau and Füssen in southwest Bavaria, Germany. The palace was commissioned by Ludwig II of Bavaria as a retreat and as a homage to Richard Wagner, the King’s inspiring muse. Although public photography of the interior is not permitted, it is the most photographed building in Germany and is one of the country’s most popular tourist destinations.

Today Neuschwanstein is one of the most popular of all the palaces and castles in Europe. Every year 1.3 million people visit “the castle of the fairy-tale king”. In the summer around 6,000 visitors a day stream through rooms that were intended for a single inhabitant.

The prince was born on the name day of the canonized Louis IX, King of France and founder of the House of Bourbon. Ludwig II was possessed by the idea of a holy kingdom by the Grace of God. In reality he was a constitutional monarch, a head of state with rights and duties and little freedom of action. For this reason he built a fantasy world around him in which – far removed from reality – he could feel he was a real king.

The conception of the palace was outlined by Ludwig II in a letter to Richard Wagner, dated May 13, 1868; “It is my intention to rebuild the old castle ruin at Hohenschwangau near the Pollat Gorge in the authentic style of the old German knights’ castles… the location is the most beautiful one could find, holy and unapproachable, a worthy temple for the divine friend who has brought salvation and true blessing to the world.”

Woodcarving in Ludwig’s bedroom took 14 carpenters 4 1/2 years to complete. The Monarch’s bed is crowned by the most intricate woodcarving and covered with richly Embroider draperies.

Gardons were built behind the Neuschwanstein Castle.

The Throne Room was created as the Grail-Hall of Parsifal. It was designed in elaborate Byzantine style. It was inspired by the Hagia Sophia in Constantinople (now Istanbul), the 2 story throne room with its series of pillars of imitation porphyry and lapis lazuli, was completed in the year of the Kings death in 1886.

The throne room, which features a glass gem-encrusted chandelier; all Twelve Apostles and six canonised kings are painted on the wall that surrounds the pedestal for the throne – the actual throne was never finished.

Just imagine a mysterious stalactite cavern just between the Living Room and the Study Ludwig II. Magnificent and charming!

The region is full of mountains, forests, meadows, lakes, cycle paths… It proposes more you can ever think possible.

Today Neuschwanstein is one of the most popular of all the palaces and castles in Europe. It is also nominated as one of the New Seven Wonders of the World.

Every year 1.3 million people visit “the castle of the fairy-tale king”. In the summer around 6,000 visitors a day stream through rooms that were intended for a single inhabitant.” [Puzzle booklet]