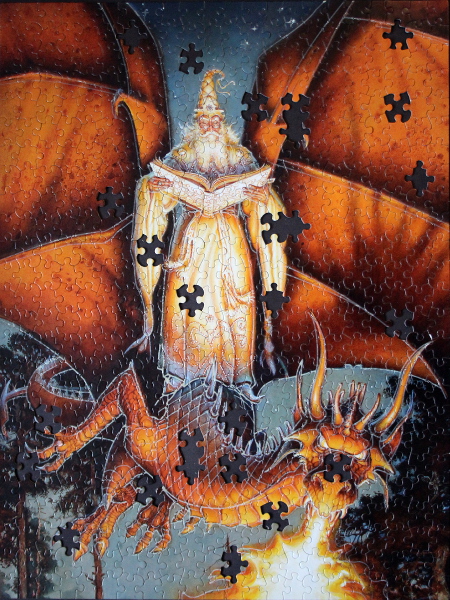 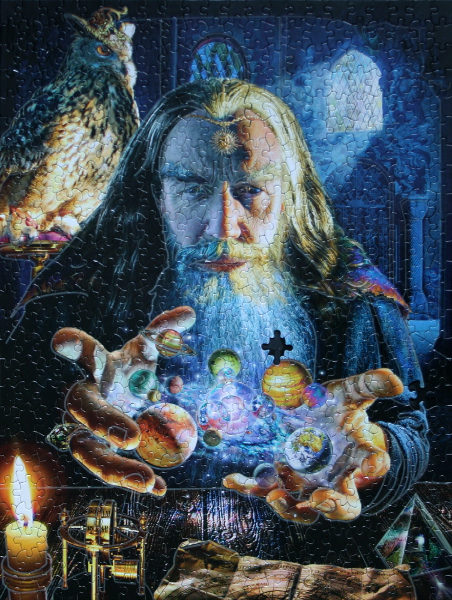 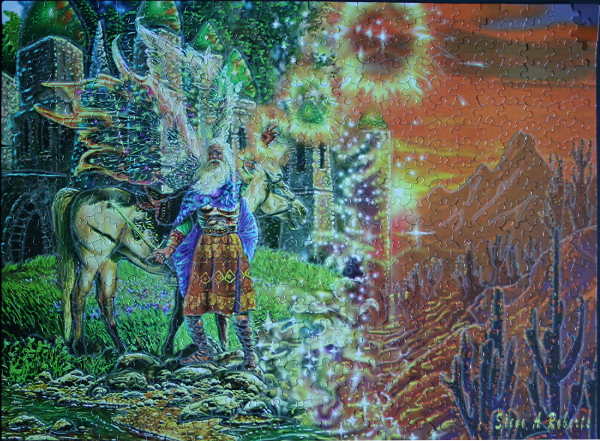 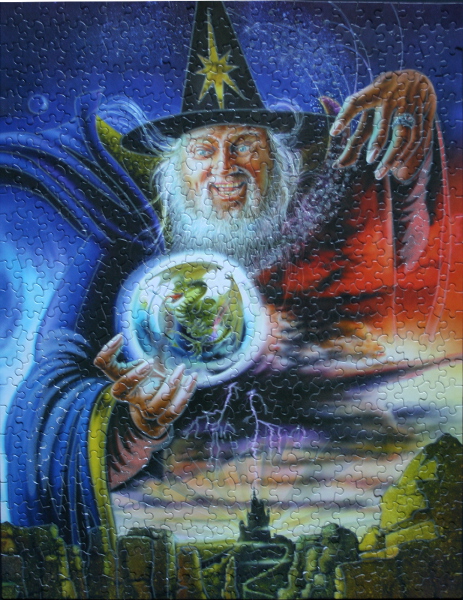 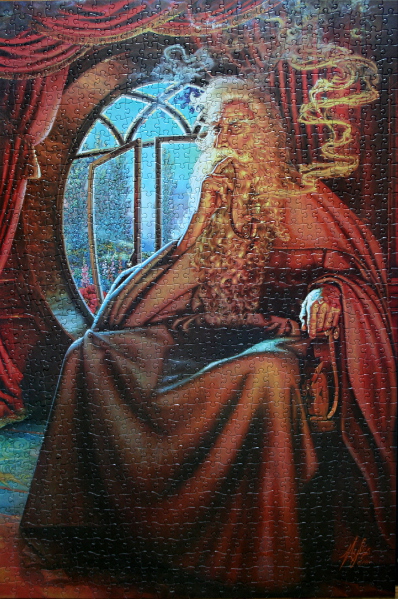 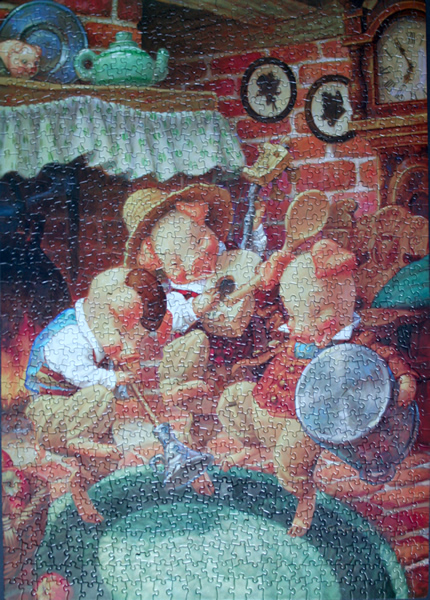 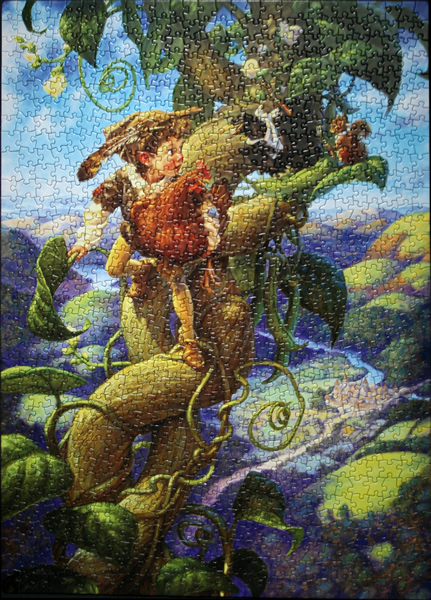 Size: 1000 pieces
Dimensions: 49cm x 68cm
Producer: Master Pieces, #71145
Notes: Jack and the Beanstalk is an English folktale. The tale is closely associated with the tale of Jack the Giant-killer, and is known under a number of versions. Benjamin Tabart’s moralized version of 1807 is the first appearance in print, but “Felix Summerly” (Henry Cole) popularized it in The Home Treasury (1842), and Joseph Jacobs rewrote it in English Fairy Tales (1890). Jacobs’s version is most commonly reprinted today and is believed to more closely adhere to the oral versions than Tabart’s, because it lacks the moralizing of that version.

In the Jacobs version of the story Jack is a young lad living with his widowed mother. Their only means of income is a cow. When this cow stops giving milk one morning, Jack is sent to the market to sell it. On the way to the market he meets an old man who offers to give him “magic” beans in exchange for the cow.

Jack takes the beans but when he arrives home without money, his mother becomes furious and throws the beans out the window and sends Jack to bed without supper.

As Jack sleeps, the beans grow into a gigantic beanstalk. Jack climbs the bean stalk and arrives in a land high up in the sky where he follows a road to a house, which is the home of an ogre. He enters the house and asks the ogre’s wife for food. She gives him food, but the ogre returns and senses that a human is nearby:

Fee-fi-fo-fum!
I smell the blood of an Englishman.
Be he live, or be he dead,
I’ll grind his bones to make my bread.

However, Jack is hidden by the ogre’s wife and overhears the ogre counting his money. Jack steals a bag of gold coins as he makes his escape down the beanstalk. Jack repeats his journey up the beanstalk two more times, each time he is helped by the increasingly suspicious wife of the ogre and narrowly escapes with one of the ogre’s treasures. The second time he steals a hen which laid golden eggs and the third time a magical harp that played by itself. This time he is almost caught by the ogre who follows him down the beanstalk. Jack calls his mother for an axe and chops the beanstalk down, killing the ogre. The end of the story has Jack and his mother living happily ever after with their new riches. [Wiki] 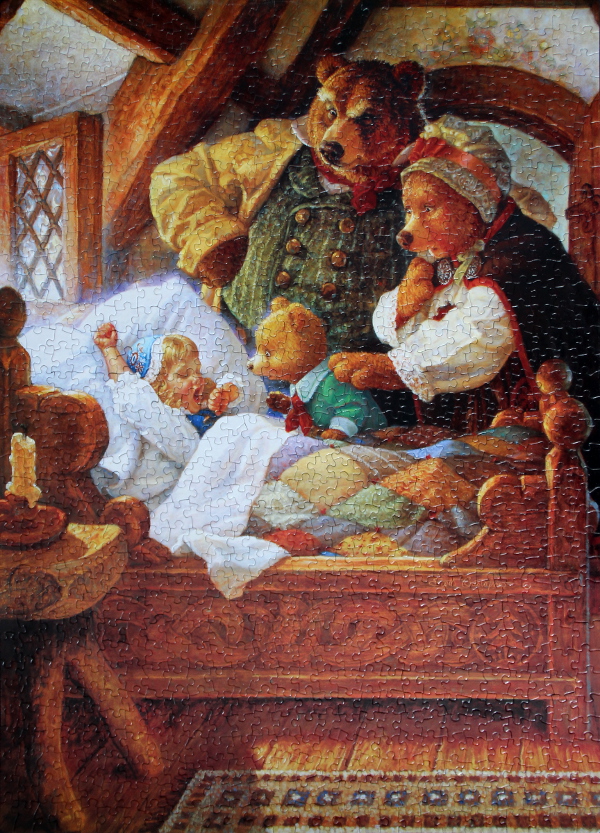 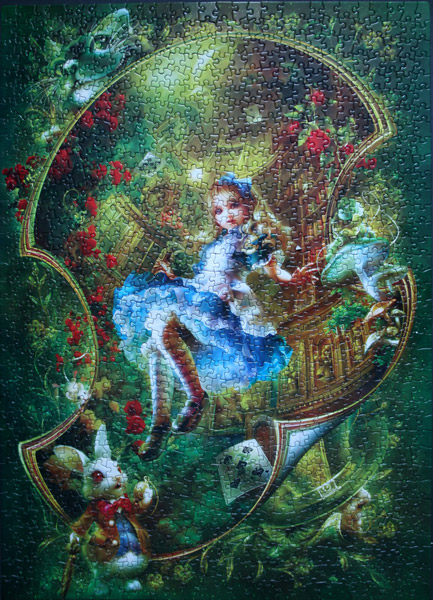 Notes: Being a child, I have read the Russian version of this book (there are 6 books comprising the series based on The Wonderful Wizard of Oz), written by Alexander Volkov, the first of which is almost identical to the L. Frank Baum’s original. I have also enjoyed listening to The Dark Side of the Rainbow (syncing the Pink Floyd’s The Dark Side of the Moon to The Wizard of Oz movie made in 1939). And so I have decided to finally check out the original book.

The most of the characters and events are very similar to the Volkov’s version, with a few exceptions. The main character is called Dorothy (as opposed to Elly) and the good witch of the South is named Glinda (as opposed to Stella), etc. Most of the discrepancies are very minor, and the story is quite enjoyable.

The following exchange made me chuckle. After the description of Dorothy’s home in Kansas as gray: with people, animals, home, and nature outside being dull and gray; she ends up in a colourful country with unique characters. Yet when the Scarecrow says: “I cannot understand why you should wish to leave this beautiful country and go back to the dry, gray place you call Kansas.“, she responds: “That is because you have no brains…“. Um, sure, that’s a reasonable retort. If Dorothy’s conversation partner was an actual person with brains, this statement would be insulting, and moreover not addressing his view at all. She goes on to explain that “No matter how dreary and gray our homes are, we people of flesh and blood would rather live there than in any other country, be it ever so beautiful. There is no place like home.“, which does push through the patriotic message and makes her meaning more clear. However, one can only conclude that nomads and immigrants are not “people of flesh and blood”. Yes, yes, it’s a children’s book and it simplifies the issue. I just wish it was expressed a little less categorical.

Overall, quite a good fairy tale with colourful characters and an engaging plot. The sequels I have read in Russian are also quite good.