It has been a busy, productive and fun weekend, with lots of playing, fresh air, and garden preparations, so much so that I had no time to write this until Wednesday evening.

On Friday, I ventured out to pick up a roll of garden fence and a few poles, to get ready for the construction of plant towers.

On Saturday, my son and partner have gone to a store in the morning to get a birthday present for a party at a climbing/crawling/swinging entertainment venue they were attending later in the day. In the meantime, I dealt with the chaos in the kitchen, and have gotten lunch ready, so that there would not be much stomach space left for the usual fare of pizza or hot dogs (seriously, I cannot believe this establishment caters to children). Having had lunch, they took the gift they bought at the store along with some Russian-English translation cards I made, and set off.

I was left at home to tend the baby and plan the garden, as we were getting seeds the next day and I needed to know what to plant. (The four unlabeled circles are the spots for the plant towers.) 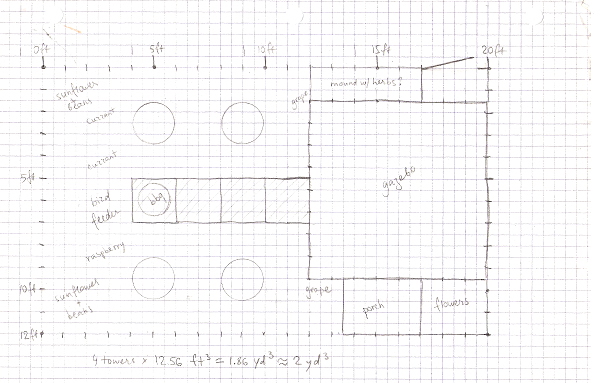 I have spent some time looking into bird feeders, as I’d like to bring the birds into my tiny garden to help with the garden insects. While searching, I have found this lovely solar-powered garden fountain that birds are supposed to like as a bath. I don’t know about birds, but I’m in love with it. Perhaps some day… 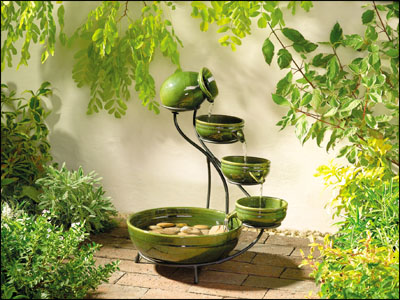 I was not so lucky finding a bird feeder I liked. The one that struck me as the most aesthetically pleasing, is made of plastic, and according to reviews is utterly destroyed by squirrels. You do recall my squirrel issue? Well, I have set out to find a feeder with squirrel protection, and have found one, together with the pole for it. I have also looked into getting a ladybug house, but, according to some, ladybugs do not have a nesting instinct and so it is futile to get such a house: they won’t live in it.

I have ventured out in the afternoon to get organic tomato plants from a friend: large cherries, beefsteak, brandywine, and roma tomatoes, and to acquire the bird feeder, the pole to hold it, and some tent pegs, to further secure the towers.

I have stayed up late Saturday night, drawing out the towers and the plants to go into them at different levels, on sunny and shady sides. Planning is half the fun, although I had to guess how many plants could possibly fit into a tower while leaving proper spaces between them. As I have never planted in a tower, I had assumed 5 rows with about 8 plants in each, alternating between two types of plants per row (sun- and partial-shade-loving) and between the rows, so that hopefully the same type of plant does not overpower its neighbours, possibly helps them out, and is easy to distinguish when grown. 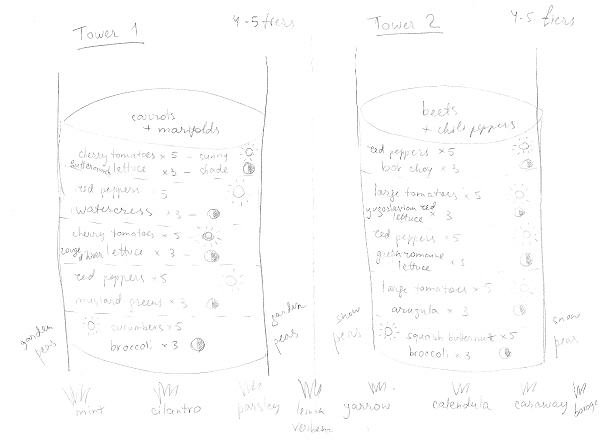 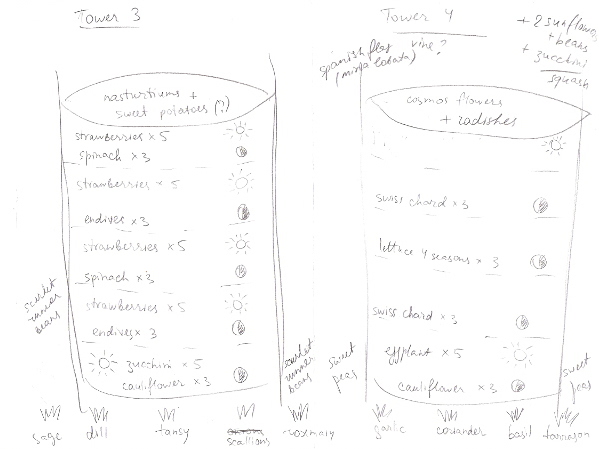 We shall see where this logic leads me. I’m sure the reality will be different from the plan, as it depends highly on the availability of seedlings and seeds, the final tower height, and so on.

On Sunday, my partner and son went to get the car fixed and to get groceries, allowing me to briefly review my copy of The Edible Balcony and come up with some more plant possibilities for the towers. I have also calculated that I needed about 2 cubic yards to create 4 towers, each 4 feed high with radius of 1 foot, and so I have ordered organic mix of peat moss, manure, black peat loam and mushroom compost from Manotick Gardens.

Greta’s organic seeds and seedlings was our destination for the afternoon. It is a beautiful piece of land, with fish ponds, a chicken coup, and greenhouses full of plants. We spent at least two hours there, my son running around reveling in all the green space, my partner keeping an eye on him, and the baby cuddled up in my ring sling, while I listened to Sebastien‘s plant recommendations and gathered up the seedlings into trays. We also got some seeds for peas, beans, kale, lettuces, carrots, and other plants to be started throughout the summer. 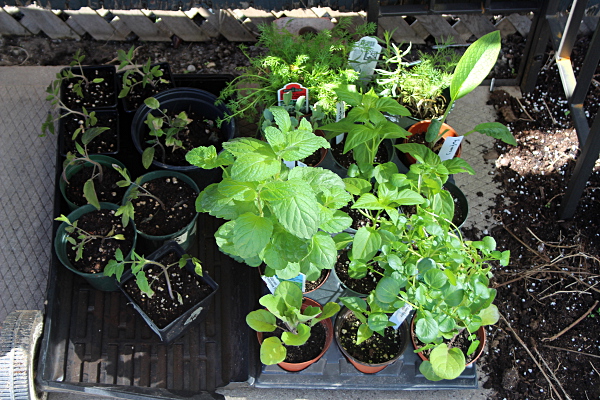 I have spent some time in the evening clearing out a corner of the garden for the soil that was to be delivered the next day. I had to replant a black currant bush and a mystery flowering plant (I can’t recall its name, but it has been growing back ever since I had planted it 3 years ago). I have also cut some tulips and hyacinths to put in a bouquet, and dug out the bulbs from other flowers that have already bloomed, to save them for next year.

Monday was Victoria Day in Canada, making for a long weekend. The soil was delivered in the afternoon, and the driver said he could not drive up to our back yard, since if he left deep tracks on the lawn, our rental corporation would be after him. We have come to a compromise of dumping the soil near the parking lot on a lawn (since even our rental corporation would hardly object to some organic soil feeding that wilting lawn corner). This meant that we had to transport the soil from the parking lot into our garden.

It was an arduous job, more so because I could not help much due to tending to both kids. Once the baby was asleep, my three-year old woke up and decided to help papa. This involved a toy truck and shovel, running barefoot on the grass between our yard and parking lot, and lots of excitement. My partner had to use our little wooden wagon without its sides, and two garbage cans, into which to shovel the soil. We have broken the wheels off our large garbage can in the process – they have just popped off, so we’ll have to figure out a way to fit them back on. 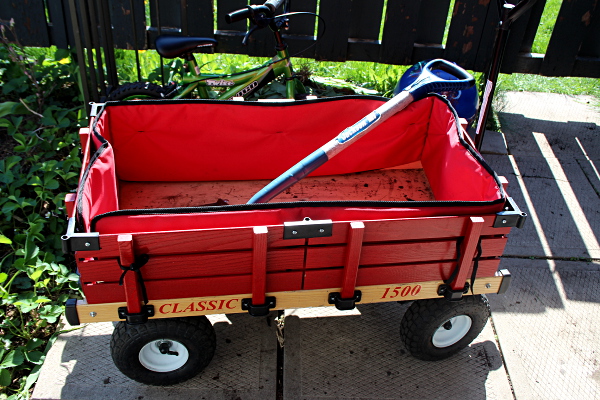 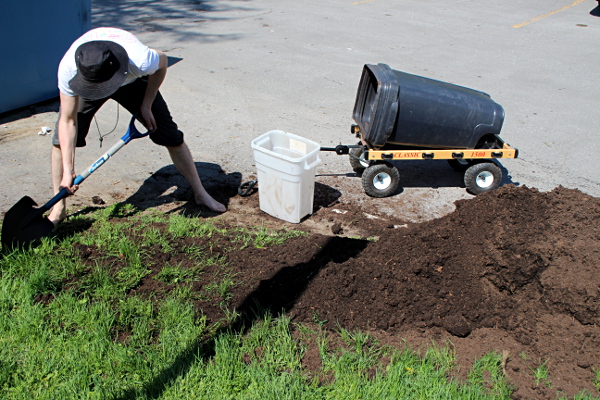 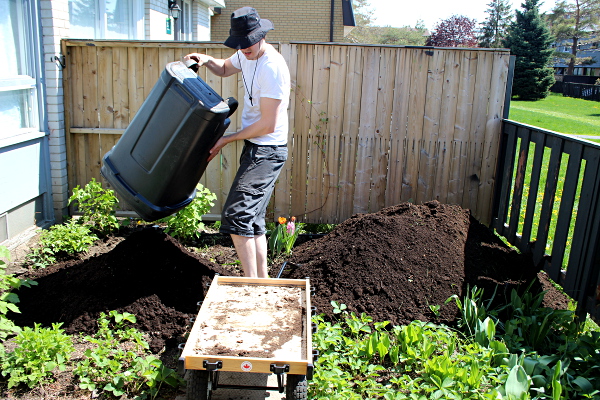 Once the soil has been moved, my partner had settled down with a cold beer, and I had engaged my son in starting the seeds we got the day before. He quite enjoyed scooping the soil into the planting trays, scattering the seeds, and watering them. We continued playing outside after dinner, as the weather was still not too hot, my son had lots of energy, and my partner needed more rest.

Lots of activity over the weekend, and at this point we are all geared up to plant, lacking only the straw that is to come later in the week, and wood sticks that Sebastien suggested we incorporate into the towers to hold moisture.