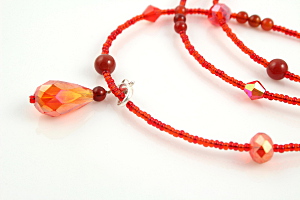 To pick up on our permaculture adventures: we have constructed The Two Towers. It took most of the day today and here are the details.

The straw was supposed to arrive on Wednesday, and so I have decided to make Tuesday a day to cook and catch up on beading and other things. I have made two strands of belly beads: Fire Opal and Blue Lagoon, and have put together designs for a few more. Baby and I went for a walk to ship some items, snuggled, played, and spent the rest of the day at home. I have put together the fencing for one of the towers on Sunday using twist ties we had lying about, and have completed another one on Tuesday.

Among our garden adventures, I have made chicken bone broth, and so on Tuesday, once the boys were out, the baby and I got cookin’. I made yellow chicken and potato curry, curried butternut squash soup, curry squash chicken sliders, steamed some broccoli, and cut up some fruit for snacks. I even remembered to make myself a smoothie of kale, a half-eaten apple (kids love doing this, don’t they?), some frozen blueberries, ground flax seed, hemp seed, and water. I have also made a batch of sangria, although using grape instead of orange juice (as I didn’t have any) made it a bit too sweet for my liking. 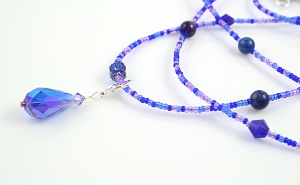 On Wednesday, I worked in the morning, and had a friend come visit around noon. Our  kids played and we chatted. Our organic box arrived later in the day. I have assembled the fencing for the remaining two towers using cable ties, and have worked on the lovely Wild Flowers belly beads in dark blue and purple glass beads, with amethyst, lapis lazuli, and blue crystals. Later Sebastien stopped by with the straw. We were all set for planting.

On Thursday, I made beet and sweet potato soup in the morning, and later, as the baby settled to sleep, I stepped outside of our yard looking for wooden sticks to put into the towers. Luckily, as the fences are currently being replaced by the rental corporation, part of a neighbour’s lilac bush got sheered off, and they had no problem with me taking the branches. It took a while to separate them into small enough pieces, armed only with scissors and a rather dull pair of secateurs, yet that meant I did not have to go any further to find wood for the towers.

To clear space for the first two towers, I have transplanted several offshoots of my raspberry bush into a pot for a friend. (I have planted the raspberries last year and they have already started to take over the garden.) The mint ended up with the same fate, as it also loves to spread itself around.

Once that was done, I have started to set up one of the towers. As our plot of land is small, I had to work on one tower at a time, clearing out plants to make space for it. I have assembled the tower from the fencing rolled into a cylinder, held together by twist ties, and attached it to four poles rooted into the ground by cable ties. 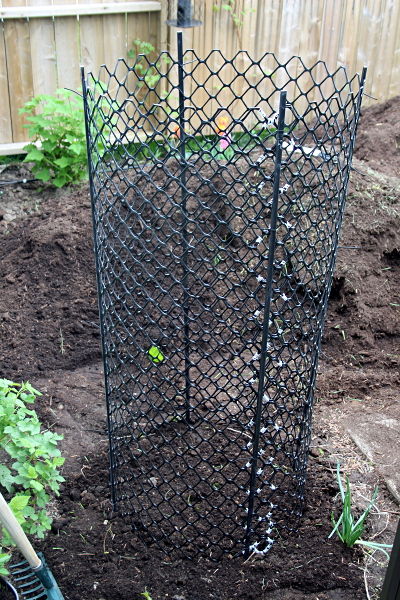 An approximately two-inch layer of straw went onto the bottom to act as a barrier for weeds from the garden soil. 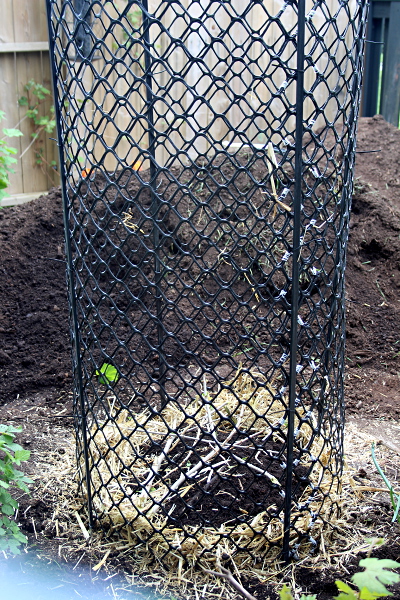 The process consisted of layering straw on the outside, while putting soil in the middle, interspersed with a few wooden branches to hold in the moisture. 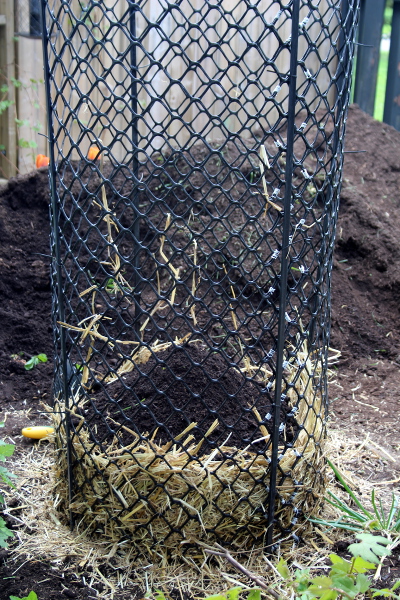 Packing in straw and soil 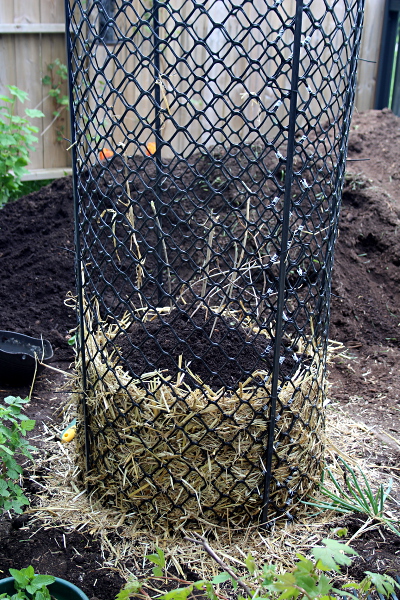 Straw outer layer and soil inside

Packing the soil against the straw was slow work, as I had to ensure the tower was even, the straw layer thick enough to hold in the soil, yet not too thick for planting, and the soil and sticks packed in tidily. The baby waking up part-way through the first tower did not speed things up. She decided it was the perfect time to play and be held, so I took a break for a couple of hours after the first tower, spending time with her, grabbing some lunch, and eventually settling her back to sleep. 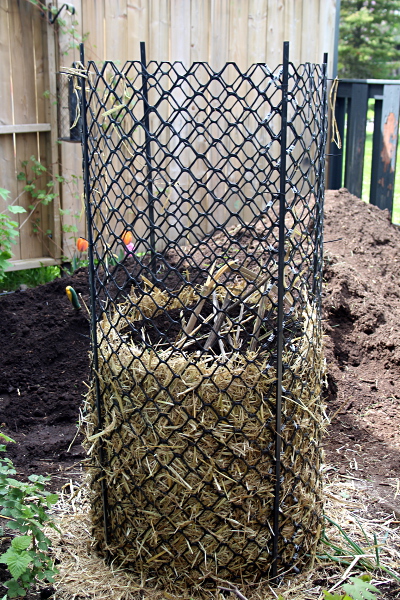 Wooden sticks inside the soil for moisture retention 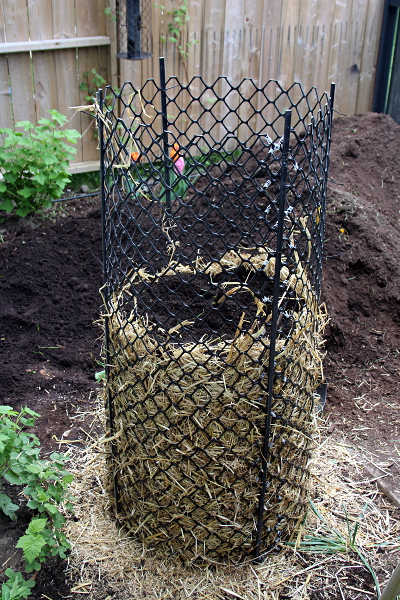 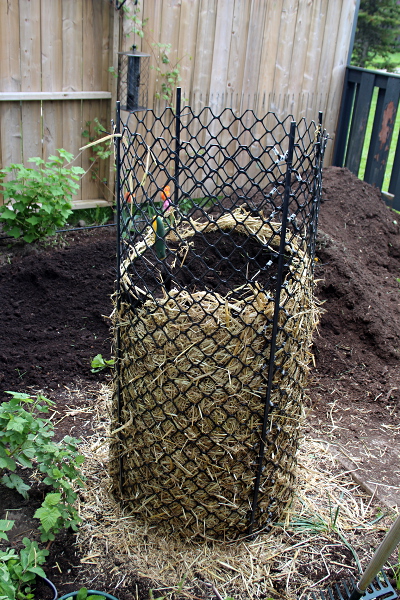 As the tower was packed, the fencing bulged a bit on the sides and settled lower to the ground, leaving the tower shorter than 4 feet. The tower came out a bit tilted. The plastic supports do not appear to be very sturdy, so I shall go to a hardware store later today to search for something stronger to reinforce it. With the strong winds we have, I want to make sure the tower is sturdy enough to weather them. 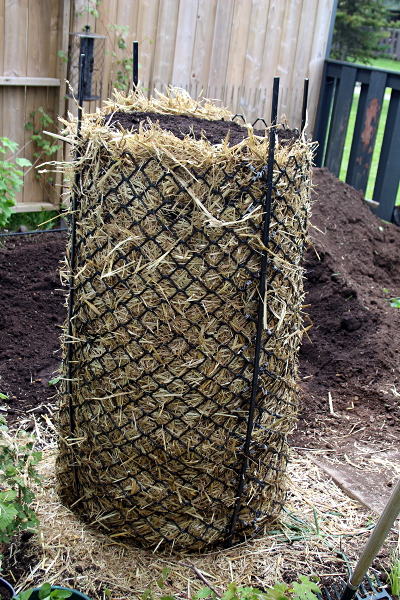 It was a good thing I talked to the man doing the work on the fences in the neighbouring yards. Apparently our fence is to be ripped up next week. He came over to look at our yard, and said that we’d just have to move the gazebo over (as opposed to disassembling and removing it completely) and take hooks off the fences. According to him, there is no need for me to transplant the black currant bushes away from the fence. He had also complimented me on the towers and said it’s too bad more people are not planting gardens. Indeed, it is somewhat of a concrete jungle in our neighbourhood.

The second tower took less time, with the baby sleeping through most of the assembly. I have been making sure to pack the straw and soil more evenly, approaching the tower from all sides, to avoid tilting and bulging, and stopped frequently to evaluate the result. However, the tower still ended up settling lower, even though it came out more straight than the first one. I guess, that comes with using flexible fencing. As long as it stays sturdy enough though, I don’t see a shorter tower as a deal-breaker. 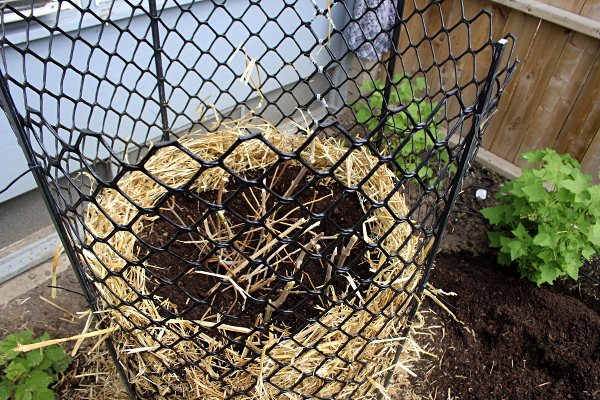 Second tower with wooden sticks inside 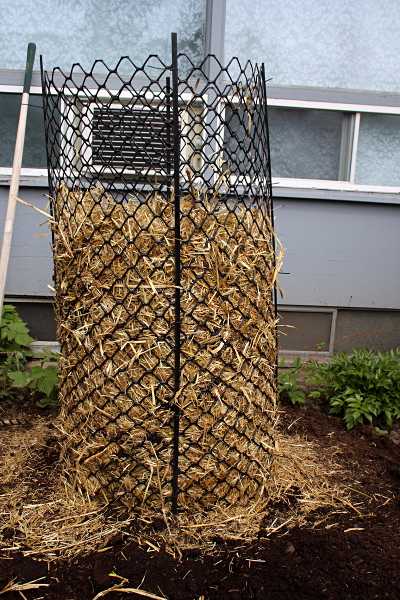 Second tower, more than half full 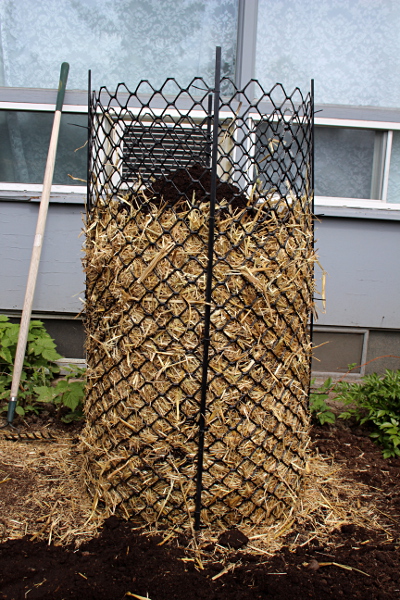 Second tower with a soil pile 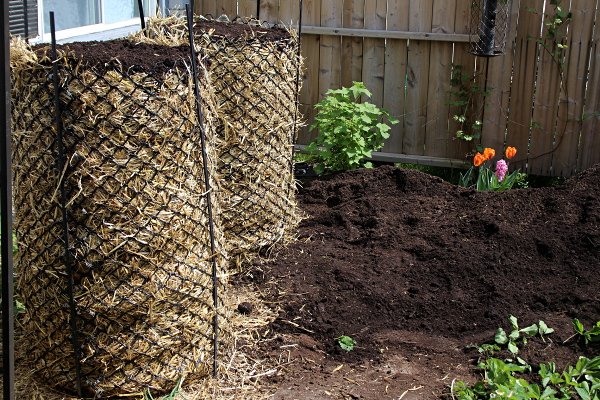 For the next tower, I would have to extract all of the strawberries I currently have growing in the garden, to make space for it. So the plan is to do it tonight, planting them into the existing towers, as it’s not going to be so hot in the evening. We shall see how much I end up accomplishing, after needing to get to a hardware store before then. 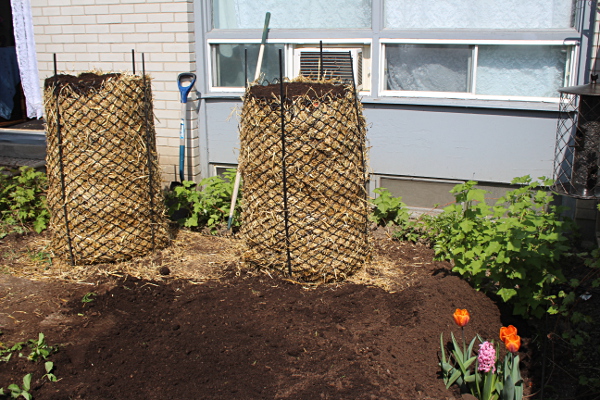 Garden with the two towers

It has been sunny and quite warm all day, although not without a refreshing breeze and an occasional cloud. As I write this, there are peals of thunder and now the pattering of rain outside. I have finished the towers quite timely, it seems. Let’s hope that the rain will ease up tonight so I can transplant the strawberries into a tower.