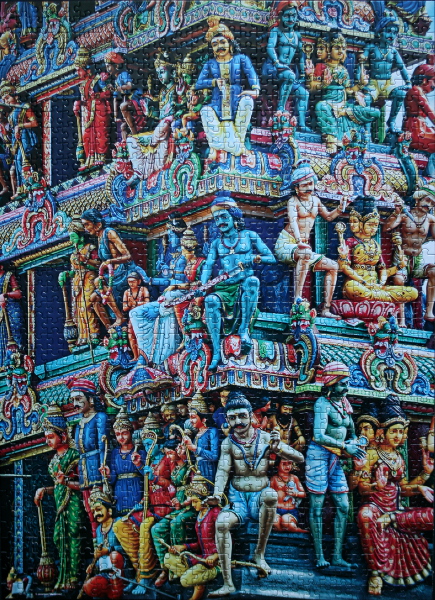 Puzzle: Another puzzle from the Structures series (see Astronomical Clock, Prague, Czech Republic, Galleries Lafayette, Paris, and Church of the Savior, St. Petersburg for more). A delight for the eyes, this puzzle is complex due to many similarly-coloured small regions and a large number of small detail. It requires some time and attention, but is definitely a pleasure to do. Any small uniformly-coloured areas are good places to start: be that the red dress of a figure in the bottom right corner, the blue steps at bottom right, the blue figure in the middle, and so on. Other good regions to do is the borders between areas – such as the vertical dividers on the left side and the balcony ledges. The various geometrical patters decorating the building can also be assembled. Putting all these pieces together requires focus and reveals many small details not easily noticed from just looking at the picture on the box.

Built in the South Indian Dravidian style, this temple features a gopuram that rises above the main entrance along South Bridge Road. It is richly embellished with six tiers of sculptures of Hindu deities, other figures and ornamental decorations. The tower tapers up towards to a moulded ornamental ridge. The scale of each tier and its sculptures is slightly smaller than that of the tier immediately below it. This helps to create the illusion of height and adds to the symbolic importance of the building. Flanking the gopuram are a sculpture of Murugan on the right and Krishna on the left (as one enters). The sculptures are all of plaster, which allows for fine detailing. They are painted in a variety of bright colours, which adds to the visually spectacular quality of the gopuram. [Wiki]